The following is a blog post from December 22, 2012 entitled –
The Star Slinky Photo: 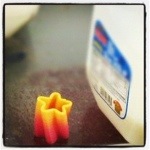 This past Spring when I got a new cell phone I was careful to make sure they could transfer all my old pictures over. Of particular interest to me was a photograph I have come to treasure. I didn’t care how great of a deal they could make me on a phone, if my pictures couldn’t come out of the store with me I didn’t want it. Mostly because of one photo I had failed to save on my computer. The Star Slinky Photo.

I took this picture last year on December 22nd, the night before we were told Izzy had cancer. When I was standing on the opposite side of the lens I had no idea that it would be one of the last recorded moments of peace I would have for a long time. We had just put both kids to bed and were getting ready to watch TV when I went to the fridge. I opened the door and, to my surprise, found someone had left a star shaped slinky on the top shelf right next to the milk. Laughing, I took a picture on my phone and posted it on Facebook. Why wouldn’t there be a star slinky in the refrigerator?

This is a picture of innocence. When this picture was taken I didn’t yet know of the darkness that had invaded my daughter’s body. Her tiny frame was yet to be cut into, or poked and prodded daily. That night, cancer still didn’t have a name in our house. There were never parts of the disease that had been vaguely explained or parts of it that had been avoided completely when talking to young ears. When I took this picture it had never occurred to me that I might outlive one of my children.

This is a picture of stability. This picture was taken on a typical Thursday night in our home. I would have come home late and Kendrick would have been cooking dinner. I’m sure the kids were busy chasing each other around the house when I walked through the door. Too busy to pay much attention to me or to remember leaving a star slinky in the fridge. When this picture was taken we were a normal family with a normal life just like you. Our kids saw each other everyday. And they knew they would see their parents everyday too. When I took this picture my words were worth something. If I said I would see them tomorrow, I was good for it.

This is a picture of peace. Another thing you can’t see in this picture is that my kids were tucked away quietly in their beds down the hall. Kids whose biggest fears were things I could promise to protect them from. Things like spiders who could be squished with a shoe and darkness that could be illuminated by a nightlight. When I walked away from the fridge and sat down on the couch to unwind, I sat in peace. No matter what kind of day it had been, I now know sitting there in that moment was peace compared to any of this. I want to remember what it felt like to be the woman taking that photo, sitting in that peace. I wish I could tell her to stay awake a little while longer and bask in it. She had no idea what was about to happen to her world when she woke up the next morning.

I am not, nor will I ever be, the same woman I was the night the Star Slinky Photo was taken. None of us will be. For better or worse, cancer is still changing us. And, yes, I believe that when we make it out on the other side of this we will be restored, but that restoration is necessary because this journey is so damaging and so depleting. For the past year I have looked at this picture with desperation wanting to go back to this one moment in time. Now I’m ready for a new picture.

I don’t need, nor do I want, a picture of this journey. Lord knows I will remember every stone along every inch of the way. But when it’s over, perhaps the day after our last treatment, I plan to take a new picture. I’m ready to start thinking about what I might see in that one. I’m learning that journeys like this take your heart and stretch it out, leaving a deeper capacity for feeling. Along the way my heart is gaining a greater capacity to feel sorrow, but it’s gaining a a greater capacity to feel joy as well. I’m choosing to believe that whatever beauty is captured in the second picture, there will be exponentially more of it than the beauty that was in the first.

A few hours ago Izzy and I made it home from the hospital from our last treatment. The kids are off playing, almost as if the past year and a half never happened. But because I am no longer the woman that took the Star Slinky Photo I know that it did. True to my word I have taken a photograph for today. A simple one, whose inspiration comes from a place deep inside my soul.

When Izzy began treatment she started receiving Beads of Courage for every event along the journey. A yellow glass bead, for instance, represents an overnight stay in the hospital – we have well over two hundred of those.  A red glass bead is given every time a child receives a blood product – we have over fifty. This system of accumulation is, of course, only as accurate as a parent’s memory. Bead sheets are turned in weekly and usually by the end of the week I can hardly remember what we did the day before so I think it’s safe to say we are missing a few.

Upon diagnosis we were given a few beads to get her collection going which included a bead for each letter of her name, a Cincinnati Children’s Hospital bead and a bead that represented diagnosis. The diagnosis bead is an silver anchor and I have hated it since day one.  Anchors represent sinking or being tied down. What a horrible way to reiterate how somehow already feels about their cancer diagnosis. My first instinct was to throw out the damn bead to be totally honest with you. I was furious when someone handed it to us and said ‘this represents your diagnosis’ with a smile. But it was not my bead so I let her keep it.

Most people actually place all of their beads on a string with the diagnosis bead as the first one. We did not do that because I did not want that anchor symbolically holding everything tied down. In fact, after a few months I talked Izzy into getting rid of the string all together and began to place all of her beads in a glass vase. She thought it was fun and I loved to see her accomplishments drown the anchor. My favorite views of the vase are those when the anchor cannot be seen at all.

When she was at her sickest, during transplant, Izzy would sink a hand into the vase and let the beads run over her skin. She liked the way they felt and the way they sounded. It was one of the few things she consistently enjoyed. I will probably never know if she liked they way they felt and sounded because they were mostly glass or because she had worked so hard to get each one. Perhaps it was a little of both.

Today as we left the hospital Izzy got her final bead. The bead for Completion of Treatment – the Purple Heart. As I held the tiny bead in my hand and read the card that went with it, tears filled my eyes:

“The purple heart originated as and remains a military decoration awarded to those members of the armed forces wounded in action. As a member of Beads of Courage your Completion of Treatment is also recognized by the prestigious purple heart.”

It has been twenty two months since the Star Slinky Photo was taken and I am not the woman that took that photograph anymore. But the woman I am now knows far more about innocence, stability and peace than she ever did because I have lived without them for most of this journey. The truth is I don’t want to be that woman anymore. This woman has a whole new appreciation for every breath, every laugh and every smile.

It is true that the future is still unknown for us. I don’t know how things will look in a month or even a year but I know this: I will walk forward celebrating the purple heart not fearing the anchor. She earned every bead in that jar except for that anchor and so I rebuke it and ask that it would sink to the deepest pit of hell never nearing her body again. I declare life over her and light within her radiating in such a way that there is no room for that anchor to ever take hold again.

Izzy can tell the closer we get to our house from Cincy by the things we pass along the way. This afternoon she got very excited as we got off on our exit, “I know this place. This is Indianapolis and this is where I belong.” Okay so it was Noblesville, but coming from a child who has earned over two hundred yellow beads sleeping in a hospital in another state it brought tears to my eyes anyway. I pray that she would always remain right here where she belongs. That her identity would continue to become more and more that of a little girl and less and less that of an oncology patient.

“But you are a chosen people, a royal priesthood, a holy nation, a people belonging to God, that you may declare the praises of Him who called you out of darkness into His wondeful light. ” 1 Peter 2:9

**I will still be writing some in the months to come. We have scans in a month and then again every few months for the next two years. Blessings to all of you who have followed our story so diligently, praying for sweet Israelle.

6 Replies to “The Purple Heart”