When she relapsed late last spring we knew that while remission was possible, it would be challenging. And we were told it would not last long. Her team was shocked when she so quickly responded to treatment. Just one dose of chemotherapy and there appeared to be no sign of disease in her body. “What does this mean?” I asked, so desperate for them to say she would be okay. “Could mean something, could mean nothing,” they seemed to imply, insisting only time would tell.

Three months later there was another scan that was not active. “Is she in remission?” I asked, still longing for assurance. “Maybe,” they said. “But there is still a spot there, it’s not active but it’s still there and it’s just too soon.” They seemed hesitant to use a strong label like, ‘remission.’

Finally, today – after one year of chemotherapy and good scans – they gave it that strong label. Today they called it: No Evidence of Disease / A Complete 2nd Remission. Today I read that there was no sign of a ‘spot’ on the report.

I sat in the Oncology Clinic with joy as I listened to the words I had waited so long to hear. I sat there with hope and I sat there with great pause. But it was not until my drive home that I grew overwhelmed with joy. Not until the long drive home that the world seemed to stand still as I remembered my prayer time with the Lord last night. As I remembered, my heart stopped for just moment and when it started again it was more whole than it had been in a long, long time. This is the story of what I remembered…

Izzy wanted to sleep with me last night because we had an appointment in Cincinnati today AND because she was convinced that when she did it ‘encouraged her to get a good night sleep.’ So after further negotiating I climbed into bed with her captivating smile. We were talking about our dog and how old she was and Izzy said she hoped she made it to her next birthday. Without skipping a beat I began the same old talk I give every time she mentions death. The talk about how everyone dies and when we die we go to heaven because we love Jesus and He loves us. I am well versed in this talk for I have long believed I would someday need to prepare her for her own death. I am so well versed in it in fact, that I completely detach from myself as I give it. “This is this and that is that.” I might as well be talking about her school supply list. As I talk I become void of all emotion, numb to the potential of love around me.

So last night, after I give my talk about death, this is what she says, “But one thing never dies, you know?” I assumed she was about to adorably regurgitate my language and talk to me about God. “Are you talking about God,” I asked, confident I knew where this was going. “No, but of course He doesn’t die either,” she replied. Her response puzzled me and I knew I would soon have to walk her back down an appropriate theological track. “What one thing doesn’t die,” I asked. “Your smile,” she said, staring up at the ceiling. “Your smile never dies.” I don’t remember how the conversation went after that because my heart broke into a million pieces as my mind began to run ahead of me. 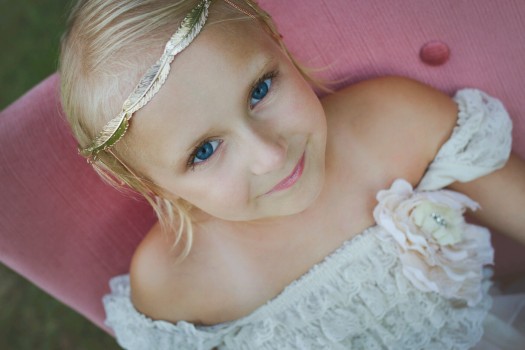 The truth is, I make a choice every day to declare LIFE for Izzy for one reason: because I do not have the faith to fully believe it. That’s why I have to declare it again and again. I have to make a conscious effort to believe it because inherently I do not. Inherently, I am exhausted and inherently I walk in fear.

I lay in bed last night long after she fell asleep still thinking about what she had said. I was so, so tired but my mind would not stop. I knew last week’s scans looked good but they never seemed to be good enough. In my fear and in my exhaustion I began a prayer exercise I had not done in a long time. I closed my eyes and pictured myself in a garden. I was surrounded by lush green leaves and bold flowers that seemed to go on forever. I sat on the edge of a stone fountain and watched my children play. This was a safe place for them, perhaps the safest place they had ever known.

I remember going to this garden in my thoughts years ago – when Izzy was first diagnosed and then again during treatment. I would lay in her hospital bed, tears flowing onto her bald head, and picture her running through this garden with long, flowing hair. And the Lord would always meet me there. I would picture him sitting next to me as we talked about my fear and my anger. I would say things to Him I couldn’t say to anyone else while she would run around and play with Carter. I could process what I was feeling because I knew that she was safe. 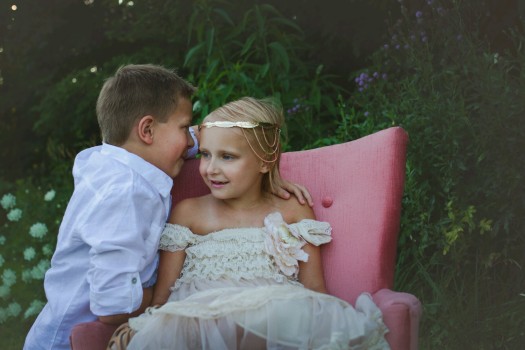 Last night as I lay in bed concentrating on this image of my children playing in the garden something different happened. The Lord came and sat next to me at the fountain just like he always did but as I started to talk he stopped me. He pointed away from my children to a couch I had never seen before and very simply He said, “You sleep. I will watch them.” It seemed very unprofound and yet as I looked to the couch I understood. As much as I wanted to watch over them and try to ensure their safety I was too tired. And having tried to do it for so long I knew I really didn’t have the power to protect them anyway. So with surrender I stood from the fountain and walked across the garden to the couch. I closed my eyes, then opened them one last time to be sure he was watching them. He was.

When I woke up at 4:30 this morning I completely forgot about the whole thing. I climbed out of bed with the same weight I do every day. I drove to Cincinnati, listened to the doctor and drove home. It wasn’t until I was driving home listening to a worship song that I remembered. It was a Matt Hammitt song that was very significant to me during aggressive treatment. The chorus says:

You are mine for a moment but you are His, forever His. And in this life I am holding you but in His arms you live. As they washed over me I remembered the words of the Father: “You sleep. I will watch them.” And He was. He really, truly was.

I still don’t pretend to know what God has planned for Izzy’s life. But I am more sure today than I have ever been that He does have one.

Blessings on you today and LIFE for Izzy.