For some parents this is a reality. A lonely hell they walk in, with only memories to guide them through the darkness of their everyday. For other parents this is what we have been told will be our reality all too soon. While we may walk in joy that our children are still alive, we carry with us the knowledge that their days have been numbered by a diagnosis with no cure. We fight to hope that modern medicine will be wrong, that our child will be the one to defy the odds so heavily stacked against them.

One thing I remember about my own childhood is belonging to clubs. A group of friends would have an idea, come up with a name and in minutes a secret club was born. I was member to clubs themed around bands, tree houses and even sidewalk chalk drawings (don’t judge, you know you were too). Such secret clubs provided a sense of belonging, a sense that I was understood and accepted by others.

As I began the ‘adult’ season of life I found myself longing to belong to groups of a different kind. Married couples, then pregnant women, then young mothers. These groups of people and the stage of life we shared offered hope and joy. We were embarking on one of life’s most promising adventures: parenthood. If we were lucky we would give birth to the little ones who grew inside our womb. We would teach them life’s most basic of lessons: how to eat, how to sleep and how to love. Though there were challenges in those early years of parenting, I finally found that I fit into a place I had always longed to be: the club of motherhood.

Nearly five years ago I was inducted into one of the most exclusive of parenting clubs. It was not a group you could sign up for at church or the gym. This club was ‘Invitation Only’ and participation was not an option. One day I was drifting through life just like anyone else and with just a phone call I became a member of the exclusive club of Pediatric Cancer. My membership card would soon be the bald head of my daughter, announcing to all the world that we belonged. My monthly dues, any sense of peace I had ever known.

Over the months and years to come I would learn intimately about this group that I had never even known existed. I would come to find that there were floors in hospitals where children suffered twenty four hours a day, seven days a week. The halls of these floors were filled with a silence that only broke when crying could be heard. The parents that passed one another in these halls were stoic, their souls numb to a reality they could not escape.

There are three types of childhood cancer: Leukemias – cancer of the blood, Lymphomas – cancer of the immune system and Solid Tumors – cancer of the bone, organ or solid tissues. Neuroblastoma is a Solid Tumor affecting only 650 children in the United States each year. Izzy was only three years old when we won the lottery with that diagnosis. Five years, two relapses and two remissions later she still receives chemotherapy two out of every three weeks. Though she is currently in remission they tell us that when we stop the chemo another relapse is inevitable. And another and another until the cancer can no longer be beat.

When you join this club of Pediatric Cancer you don’t ever leave. You are a member for always. I believe that those families who do find cures are able to separate themselves from the pain of the past but it is still a part of their story, a part of who they are. Once you lie in a hospital bed with your child and watch them vomit blood day after day after crazy day you can’t go back. Once you lie awake at night and wonder if the drugs you’re giving your child will kill the cancer or kill them, you can’t go back. You can never go back to what life was like before that. Ever.

September is Pediatric Cancer Awareness month. Do you know what that means? It means that for thirty days our social media feeds will begin to shower statistics about the lack of funding available. Funding lacking from the Federal Government and Pharmaceutical Companies alike. For thirty days individuals and organizations will rally together and try to make a difference. And the truth is – they just might. But you know who none of that will make a difference for? The kids fighting right now. Kids like Izzy. Izzy. 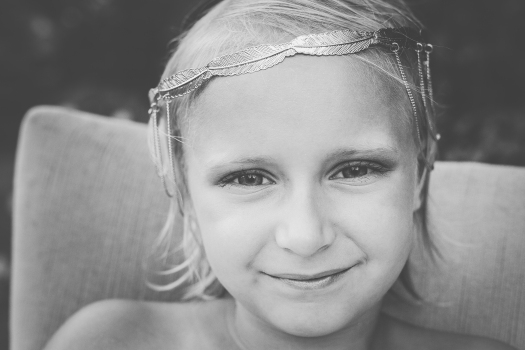 By the time the funding is there to support the research needed it will be tomorrow. And tomorrow will be too late for the kids waiting for a cure today.

So you know what you can do this September? Be thankful for what you have and be kind to those that don’t have it. Stop complaining about traffic on the interstate and the crappy weather. Stop making a big deal about things that just aren’t. Don’t look at what your life is missing but look at what is right in front of you. And then? Enjoy. Every. Second. That is the story of Izzy. She has brought and continues to bring life and joy to those around her. She teaches us to live in this moment and to never stop hoping for the next.

Israelle – “But you are a chosen people, a royal priesthood belonging to God, that you may declare the praises of him who called you out of darkness into his wonderful light.” 1 Peter 2:9

Blessings on you today and in this month of September and LIFE for Izzy.

**If you do feel led to help support Pediatric Cancer Research, Children’s Oncology Group is a great place to put your funds. DONATE HERE

8 Replies to “The Exclusive Club of Pediatric Cancer”