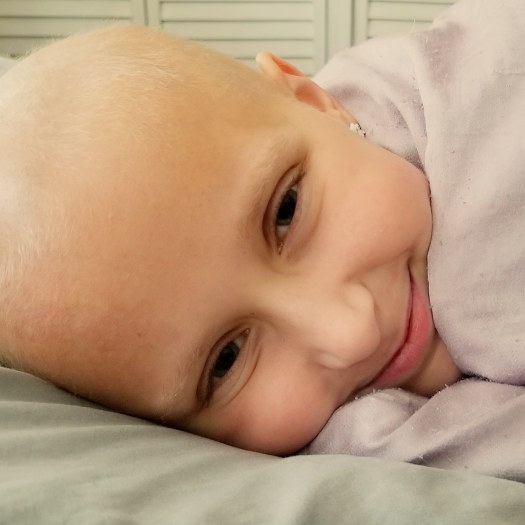 ** I wrote this post in 2015. Four years and three relapses later, Izzy no longer has as an immune system that can protect her. My son, Carter, is 12. Today we spent the early morning hours at the ER because he is presenting with classic symptoms of Mumps. Year after year the CDC reports an increase in cases of things that were once eradicated. Things that are resurfacing because of the anti-vaccine movement. I don’t yet know if Carter has the Mumps but that’s not really the point. The point is this: he could and it could kill her and that’s because of the ignorance of many – so thanks. **

Two weeks ago I found myself in the Oncology Department of Cincinnati Children’s Hospital waiting to find out if my daughter’s cancer had returned. Izzy was born in 2008 and diagnosed in 2011. Now, 2015, we have officially passed the point where cancer has been a part of her life longer than it has not. So, I’m sitting in this Oncology Department surrounded by little bald kids wearing tiny little protective masks. I’m surrounded by traumatized parents pushing IV poles behind said kids. I’m surrounded by a reality that is far too close to home. As I wait for our doctor to come in with our results, wait for him to tell me if Izzy’s likely to live the next four years or not, I scroll through my Facebook feed. Someone had a great lunch, thanks for sharing. Someone got a haircut, ooh, that’s cute. Then I see it. My heart begins to race and I am angered. I scroll right on by and pretend I did not see this offensive post from someone about not vaccinating their kid. I try not to let it bother me.

But hours later, after a follow up appointment with another pediatric specialist it is still bothering me. The car is quiet and the sky is dark and mostly I’m at peace about the good news we received from the scans. They did reveal a lot of iron buildup still on her liver (from so many blood transfusions during treatment) so we will likely have to begin regular phlebotomies to remove it. But the scans showed no sign of cancer so I’m thrilled to be dealing with iron.

I drive in the stillness and I wander back to the comment I saw. Wander back to all the comments and all the articles I’ve seen on this anti-vaccine movement and my heart thinks back to those children at the hospital. Children who could die, not from the diseases they are fighting, but from the people leaving offensive comments about vaccines trying to be funny. I wonder what suffering those children will endure tonight as they lay in those hospital beds. I think about the hundreds of nights we stayed there and I am thankful to have Izzy alive, in my car, on our way home to her own bed. I think about other people who don’t have sick kids and who just can’t understand. I start trying to make myself see that they just want to protect their kids too. That those people who find themselves amidst this movement truly think they are making the best decision.

And then it happens. There is this moment when my own discontent sees the gap between the anti-vaccine movement and the sick kids. I see, ever so clearly, what I have never seen before. It stands so perfectly in front of me I could almost touch it. I see what has been missing from this argument all along. Mercy.
When we sit back and think our view on something is the only way to see it and become unwilling to hear others out, like really hear them out not just humor them, I’d call that arrogance. I’d call that pride. But when we are willing to sit down and listen (notice I didn’t say talk), when we are willing to sit down and listen to one another and make at least some attempt at understanding the other’s point of view, I’d call that grace. That grace can lead us to have mercy for one another. Mercy in this context is saying, “I don’t have to vaccinate my child. But because me not doing it risks SO MUCH for SO MANY, I will.” If mercy could speak to the anti-vaccine movement it would sound like that.
It is obvious where I stand on this issue but as a Christian who wants to carry the presence of Christ everywhere I go, I have to be willing to listen to people who aren’t just like me. I have to be willing to believe the best in them. To try to understand their heart and to come to them with true humility when I don’t and say, “I don’t understand.” And what would happen if they came back to me and said, “I don’t understand you either.?” Well first of all that would be the Kingdom of God advancing on earth. That would be a Christ like approach to conflict. That would be a step towards mercy. And if that happened, if I could sit down and talk to another mom or dad over coffee while our kids play in my backyard, this is what I would say. It wouldn’t be perfect, it wouldn’t be pretty, but it’s all I’ve got:

I respect you. I honor the choices you have made and the time you have put into making them. I honestly do see value in the choice you have made for your child. I just want you to know one thing: the choice you are making, the choice you think is best for protecting your child, is not a right. It is a privilege. Now slow down, don’t get fired up. I’m not saying it’s a privilege because it can or cannot be taken away by the government. I’m saying it’s a privilege because it can be taken away by life itself. When we start out as parents we all think that’s a right we have but some of us learn harder than others that it’s just not. Our kids are not actually entitled to life and we are not actually entitled to getting to protect it. If we’re lucky and if we’re blessed, we get both. But some get neither.

Clearly when Izzy was going through chemotherapy her immune system was dangerously at risk of being contaminated by anything and everything. Then, to make things worse she had to have a stem-cell transplant and it saved her life but it wiped out all of her cell’s memory. Her body had no record of vaccines. We had to wait nearly a year and a half before her immune system was ready for us to start over. Fortunately now we are gradually giving her vaccines again but it will be a slow process. For two years I just prayed that she would not be exposed to something. She was already fighting cancer but I was praying she wouldn’t be exposed to something that could make your kid sick but kill mine. So, please, can you just try to understand that so many people, so many children, don’t have the privilege of protecting themselves. We need your help.

That’s all I would say and then I would listen. I would listen to everything you had to say. But when you were done and our coffee mugs were empty, if you still couldn’t have mercy on my family I would ask you to do one thing. Before you leave let’s bring all our kids up here and sit them down in a big circle on my deck. After they stop giggling and once you finally get their attention, I want you to look my daughter in the eye and tell her that her life is not worth protecting. I want you to tell her that you could do your part but that you won’t. You can say you are sorry she was sick and whatever else you want but I want you to say the other stuff too and I want you to say it with your kid listening.

I know that seems harsh, I do. I went back and forth a million times on whether or not to write that part. But let’s be honest: If you are not vaccinating your child that is what you are saying. You just aren’t using words.

I do respect you and I do honor your choice but that does not mean I have to like it. I think it is a choice that is selfish and I think it is a choice that lacks mercy. Mercy acts compassionately towards someone even thought they don’t deserve it. You don’t owe anything to kids who are fighting or have fought cancer. But you have something amazing you can give if you are willing.