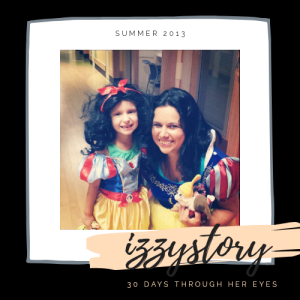 I was in the hospital a week that first time I got antibody. It was one of the hardest weeks I ever had in the hospital so I was not excited to have to do it a bunch more times. I was so glad to be home but the thing was, I had to start getting shots everyday. They were supposed to help my cells get a big army to win the war. The shots weren’t so bad after a while but I didn’t like it very much, especially at first.

We found out a couple of things that summer. One thing we found out was why I was still throwing up all the time. When the sores in my throat got better they made my throat close up. One time they did this test where I had sleep medicine and they tried to go down my throat with a camera except the camera wouldn’t even fit. My throat had closed up too much. I had to start going in every couple of weeks and having my throat stretched out. It wasn’t too bad because they did it while I was asleep. After they did it a couple times I started to be able to eat again. It was so amazing. Food would sound good and I could actually eat it and not throw it up.

The other thing we found out was that I was going to be able to go to kindergarten! Even though I would miss a lot of school for treatment there was a way the doctors worked it out with my school and they would still let me go. We were all real happy about that, especially me and Carter because we got to go to school together. I was real excited that I got to go straight to kindergarten and skip preschool. I didn’t know anyone who had been able to do that. I figured the school must have known that I was really ready
I had to be in the hospital a lot of times that summer for antibody. Sometimes being in the hospital was bad because I would get stuck in isolation and not be able to leave my room. Like the time I got chicken pox. We were not happy about that at all. We had to stop the antibody (well, I was kinda happy about that) and start a new medicine for the chicken pox. But sometimes being in the hospital was fun. Miss Judy and I got to hang out with some really fun nurses and doctors. I was one of Dr. Satheesh’s first real patients so I think that made me special to him. Dr. Carina worked nights and she would always come in and do crafts with me after the other kids went to bed. One time we even had a parade together where we both were Snow White. I was confused about whether or not she was the real Snow White. Mommy said that was because I was on so much morphine – whatever that meant. But I liked our doctors a lot and after I got to know them I learned they really like the kids they are trying to make better.